Deck Review of the Wildwood Tarot

The Wildwood Tarot deck is deck that I picked up because of the nature theme. This deck was created by John Matthews and Mark Ryan, who have created other decks as well.  Although this deck is set up like a typical tarot deck (having 78 cards and the typical arcana split), the names of the suits have changed as well as the name of all of the cards. There are some similarities between the major arcana of this deck and that of the traditional Rider Waite Smith deck, but this deck has more of a hunter gatherer feel to me.  By that I mean it feel more like a deck that relates to someone who lives in the woods and follows nature for their yearly timings and celebrations. Someone who is very connected with the earth and does not follow much of modern society.

The Suits of the Wildwood Deck

The suits of the Wildwood deck correspond to the Rider Waite Smith deck and the elements in the following way and are also given a correspondence of time on the pre-Christian Wheel of the Year, which is outlined in the guidebook that comes with the deck.

Bows are Fire and correspond to the Suit of Wands

Stones are Earth and correspond to the Suit of Pentacles

Vessels are Water and correspond to the Suit of Cups

Arrows are Air and correspond to the Suit of Swords

When looking through the Major Arcana, you are able to correspond the cards to the cards in the Ride Waite Smith deck as shown below. The meanings of the cards are vaguely the same, but I find that the Wildwood deck is more of a shadow work and deep emotional deck than that of the typical RWS deck. This deck should be learned on it’s own as a separate deck, not using the typical RWS meanings for the best readings.
This is also a good deck for those who want to learn about paganism. It teaches you the basics about holidays and the way of life that pagans once lived. The first part of the guidebook gives the typical overview of how to use a tarot deck, but also gives you an outline of how this deck specifically lines up the the Wheel of the Year and how to use the timing in your readings.
This deck really gets into the deeper meanings of life. It goes deeper into feelings and emotions that the typical RWS deck does.  I love this deck for when I want to know deeper meanings of something that may have been unearthed when doing a general reading with the RWS style decks.

Some of my favorite cards are: 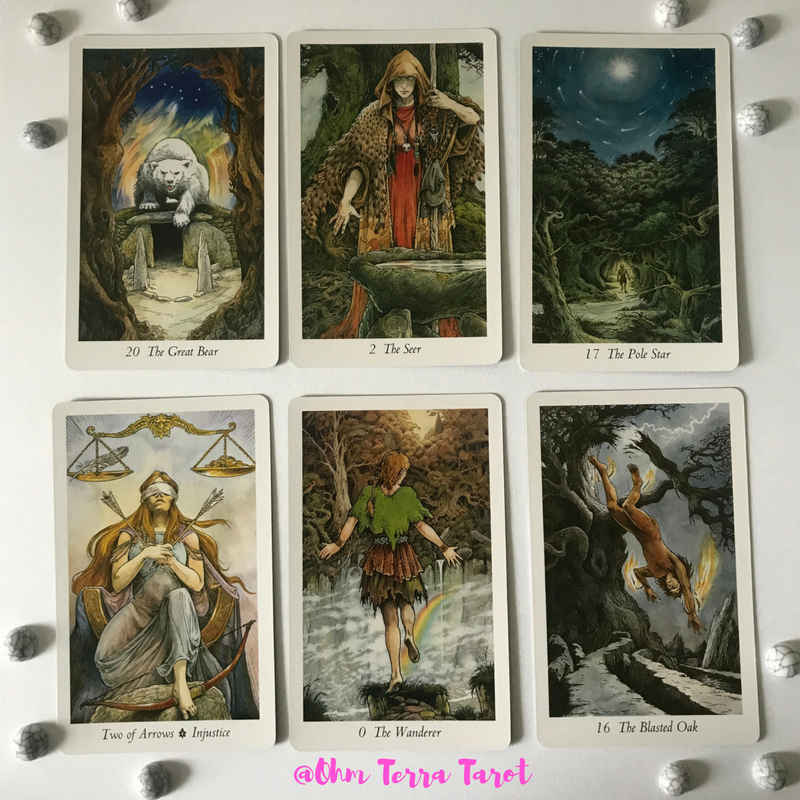 The cardstock decent. It doesn’t seem to have any type of coating on it, so there is some need to be careful. It is not as thick as some of my other decks, but it is also not as thin as some of my decks either. The back of the deck has a double sided tree so the deck can be read with reversals, if you so wish, but the meanings of reversal are not given in the book. The imagery on the cards really lets me connect with the deck intuitively and go deeper into myself during a reading.

It does come with it’s own guidebook which becomes invaluable for decks that have meanings that differ so drastically from the typical RWS meanings. The book is a good size and gives description and story of each card. It has a very big focus on pagan holidays and pagan knowledge. This would be a great deck if you were pagan and knew all of the knowledge and the history and meanings behind the holidays. Even if you aren’t pagan, or aren’t interested in paganism, this is still a great deck because it will allow you to connect more with nature.

If any of this sparked your interest, you can check out the deck here on Amazon.

Since writing this initial review of the Wildwood deck, I have read more about the deck and the author has even published a workbook to use with the deck called Wild Magic which is also available on Amazon. This workbook goes very in depth into the lore of the deck and the druid/pagan ways of life. In addition, a second book also came out by the Alison Cross called A Year in the Wildwood, which takes you through the deck as throughout the year. This is more of a workbook that you use throughout the seasons, for seasonal celebrations and guidance throughout the year.

If you are interested in this deck and learning more about the way of life that is referenced throughout the deck, getting the deck and the 2 extra books would be invaluable.

This post or video contains affiliate links, which means I may receive a commission for purchases made through my links.