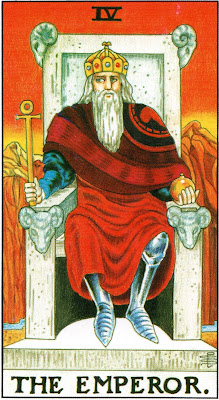 Upright Keywords: authority, government, structure, a father figure, stability, action, protection, discipline
Reversed Keywords: passivity, overthrow, domination, excessive control, lack of discipline, inflexibility.
The Emperor sits on a concrete (or stone?) throne facing forward. He is confident, but still wears armor to shield himself from harm. This man has gotten to where he is by mastering himself and the world around him.

This card denotes a powerful man, with authority and ambition. Typically the husband or other intimate partner who is constant and trustworthy. He likes conformity and tradition in order to be happy. You also may be adopting this fatherly energy in yourself.

He represents balance, security and conventional values. Revealing mastery of life and control over territory and predicts that problems will be overcome with careful planning and single-mindedness. He shows a return to order or an improvement in circumstances.  You may also be offered protection from someone you trust.

This card is a leader who demands respect and authority. But he does not rule with a mean hand. This energy is very comfortable in leadership roles with clear visions of what they want to create. You’re not intimidated by conflict or confrontation, but you do like to have the last word.

This leadership role may come because you have learned a lot throughout your life through experience. This doesn’t mean that you’re old, but you may be an old soul. You enjoy helping people with their problems when you can and giving guidance and advice.

The Emperor urges you to be confident in who you are. You are powerful and you know it. Let it show.. just don’t let it go to your head. 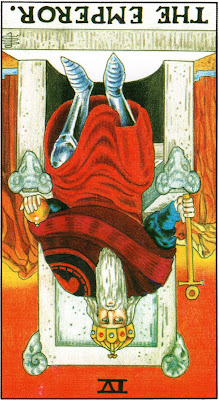 When The Emperor is reversed, this energy is power-hungry and excessive in his demands and represents the negative traits associated with traditional masculinity, such as being domineering, controlling, or even cruel. Sometimes even being greedy. He no longer knows his boundaries and may use excessive force or persuasion to get what he wants. This card shows issues with authority figures and others who are ruled by their egos.

You could be shying away from the true leader that you are. Others may be looking to you for advice and guidance, but you’re not stepping up to the plate. This may be due to confidence or a preference to stay in the background. Find other ways that may not be the center of attention to share your knowledge.

There’s a need to practice a little tough love on yourself when it comes to getting things done. Make sure that you have a plan in place and that it’s a sound plan, then keep going with it. You may want to feel lazy, but now is not that time.

When it comes to relationships, you may be in a one sided or unequal relationship. The qualities that you at first found comforting in your Emperor partner may have evolved into something more. Something that no longer vibes with you.