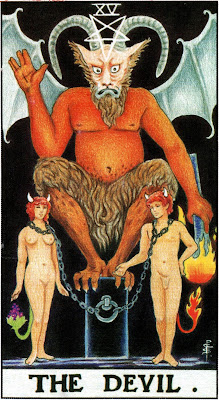 An image of Baphomet sits above a man and a woman who are both chained. Baphomet (or the Devil) has one hand facing up and the other holding a torch, facing down. Bringing the power from above and connecting it with the power from above ( like The Magician). He also has a pentagram on his head, facing down. The man and woman both have tails of grapes and fire, respectively. The chains are loose around their neck and attached to the pillar that the Devil perches upon.

You may need to address your Shadow side, that side of you that you hide from others and sometimes yourself. This is an important side of yourself to have and you shouldn’t just repress it. But this side should be explored and see if there are blockages in this area that hold you back from showing up as your Highest Self.

The Devil represents negative patterns in your life. This may be addictions, lack of self- control, obsession, fear mindsets that hold you back. It’s time to work on these and release them.

You may be wanting to try something kinky in the bedroom when this card comes up, bondage in the literal sense. Just make sure that you do this in a safe space with someone that you trust. 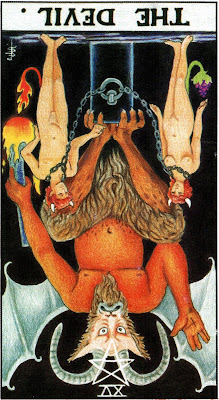 Reversed, this card is similar to the Upright meaning where you need to look inside your self to release unhealthy attachments to things to be able to step into your Highest Self. You may need to do some self acceptance of your shadow self, because it is a part of, no matter what. You can’t be whole with out it.

Take this time to focus on releasing the negative things, relationships, and patterns in your life. This is a time of transformation.